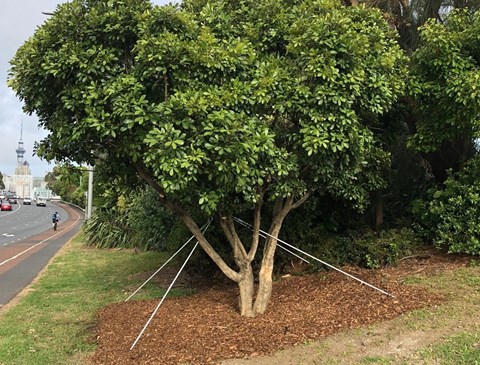 Image: One of the trees, a houpara, in its new location in Teal Park (image: Auckland Transport/ Auckland Council)

Last week a group of protesters occupied part of a planted median strip on Quay Street, from where 14 young Pohutukawa are being transplanted to the berm to make room for a cycleway. Auckland Transport has been planning this 1km cycleway extension since 2015 and held a full public consultation in June 2017. It has successfully transplanted similar trees in the past two years to Harbour Bridge Park and Teal Park.

The Tree Council supported this publicly notified consent application by Auckland Transport because we felt the trees had a far better chance of a long and healthy life in the berm than in such a tiny bed in the middle of the road where they have limited soil volume to grow in and will be constantly cut on both sides to accommodate the traffic.

Retaining existing trees within new developments is always preferable where this is practical, however the Tree Council believes that the trees concerned have the best chance of long-term survival if they are moved away from their present location in the middle of the road to locations where there will be fewer constraints on their growth above and below ground.

The Tree Council questions the sense of the timing & believe it is more to do with having less traffic during the holidays than for the health of the trees, but not the intent of the outcome which we think is sensible. We have requested that Auckland Transport delay the rest of the transplanting until the autumn rather than doing it in the middle of a drought, however we acknowledge that transplantation of trees can be successfully completed regardless of the lack of rainfall if the trees are well watered throughout the transplanting process. Their survival will depend on good management. It is a requirement of the consent for this project that any of the trees that die within 36 months of the transplanting must be replaced by 400lt nursery stock.

Having trees next to the cycleway for shade will be better for everyone using it. This should not be made into a battle between cyclists and trees, because both are vitally important for a healthy city. What we need is fewer cars and more cycleways shaded by trees. Hopefully more cycleways and more street trees will be major elements in Auckland Council’s Urban Forest Strategy.

Meri Kirihimete from The Tree Council. Thanks for your support for our urban ngahere this year. We hope you have a peaceful and relaxing holiday with your loved ones. See you in 2022. ... See MoreSee Less